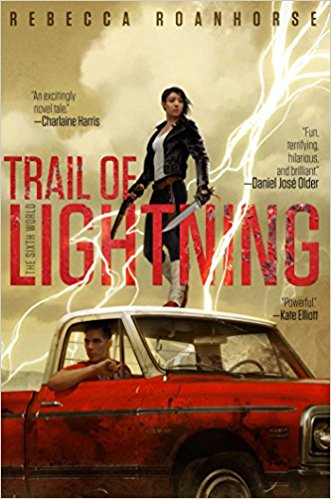 My husband picked this book out for me, and I’m really glad that he did. I originally reviewed it here.

Maggie Hoskie is a monsterslayer, living in what’s left of the United States after the big floods have wiped out most of the country. This is the first entry in The Sixth World series, and it’s a dystopian storyline focusing on Indigenous people after near-global destruction.

The world-building is exceptional. The author doesn’t gloss everything over and pretend that elimination of the financial centers on the East Coast and the U.S. government is going to produce a Utopia overnight. There are complications in this new world; police are corrupt, everyone is concerned about their end and fear and superstition can be as important as currency. Maggie is something of an outcast; one of the things she needs to work through is accepting herself. The author weaves Indigenous beliefs (about the coyote, for example) into the story but modernizes the beliefs to blend in with her futuristic dystopian tale, and it works so well. Highly entertaining, with a kick-ass female protagonist who handles herself.

Still got Christmas shopping to do? Get out there and add this to your stocking stuffers. Teens and adults alike will appreciate the edge-of-your-seat intensity of this action-packed novel.

The Sixth World that Rebecca Roanhorse writes about in Trail of Lightning is an amalgamation of what’s left of the United States after the Big Water. Yes, a flood has not only wiped out the coastlines, but most of the country and billions of people world-wide.

Welcome to a world where monsters are real, the gods of the Indigenous survivors of Big Water walk the earth and wreak havoc.

Enter Maggie Hoskie, Monsterslayer. When a young girl is taken from her home by a monster that poses a distinct new threat, Maggie comes out of exile to hunt the monster down. She’s a person who’s endured a lot of loss; her parents, grandmother and the god she loves are all gone. The only distinction is that the god chose to leave her while her family is deceased.

Maggie’s clan powers enable her to kill efficiently and swiftly, but they also alienate her from others in Dinétah, where she lives.

.Trail of Lightning centers on Maggie. It focuses on how she became what she is and the losses she’s suffered. As she gets to know Kai barriers begin to break down and ultimately she’ll have to choose between the god from her past or the man in her present. Maggie will also have to make decisions about what she wants from her life and whether or not she’s willing to open herself up to people, in spite of the possibility of losing them.

This is a story that exists in a rich alternate reality, in a not-too-distant future that it’s easy to believe in. One of the things I appreciated about it was that there could be whole series of books written about what happened in the wake of the Big Water, before the Wall was built. The landscape that Roanhorse is using is so rich there’s a sense of a well developed history that has brought the Diné to where they are in the current storyline.

Maggie is a formidable female character who waits for no man to rescue her and shares her heart sparingly. She is principled and cares about people, evidenced by her willingness to do whatever it takes to stop the monsters who are slaughtering people. She’s even willing to die herself, a willingness that may be tested before the novel’s end.

I was completely lost in this story as I read and thoroughly enjoyed getting to know Maggie and her world. Even when I thought I could see where the story was going, surprises were in store that kept it from feeling anything but predictable or familiar. Roanhorse has done an exceptional job crafting a rich group of characters and creating The Sixth World – a word I can’t wait to return to. This is a fantastic read for those who love speculative fiction with strong characters, a good mystery, action, a bit of horror and a healthy dose of supernatural beings.