Yesterday’s News: An 11-year-old girl disappears on her way to school in New York City – setting off a chain reaction of tragic events involving extortion, kidnapping and murder.

Fun Fact: “I was a tabloid journalist in NYC for many years, and I was part of the New York Post newsroom there that created the legendary Headless Body in Topless Bar headline. For a story about a holdup man who robbed a topless bar, murdered someone there and bizarrely cut off the victim’s head and took it with him as he fled. Many people have called it the best newspaper headline ever.” – R.G. Belsky

SR: What’s your new book about? 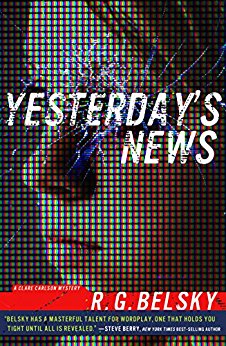 RGB: It’s about a legendary missing child case in New York City – and a reporter, TV journalist Clare Carlson, obsessed with finding out in the truth about what really happened. Little 11-year-old Lucy Devlin simply vanished on her way to school one morning 15 years ago, and was never seen or heard from again. Clare Carlson won a Pulitzer Prize back then for her extraordinary reporting on the tragic story. But now, on the 15th anniversary of Lucy’s disappearance, the story explodes back onto the front pages again with new evidence, new questions and new suspects. A lot of people seem to have secrets they’re hiding about the case – but we soon learn that Clare has her own secrets too.

SR: Was there a specific issue or incident that really motivated you to write this particular story? What was the prompt?

RGB: As a journalist who covered a lot of crime stories, I discovered that nothing was as heartbreaking as a missing persons case. In some ways, it’s worse than murder – because you never know for sure if the victim is dead or alive. I covered the legendary Etan Patz case back in 1979, about a six-year-old boy who disappeared without a trace. For years afterward, there were false leads and hopes that he might still be alive. Finally, several years ago, a suspect was convinced of his murder – which at least gave his family some closure in their grief. But my story in YESTERDAY’S NEWS is about a different kind of missing child case – one in which there is no closure, no answers for the family. Until my character, TV journalist Clare Carlson, goes looking for the truth.

SR: How do you think your protagonist would respond if aliens landed in the center of town on page 57?

RGB: My protagonist is the news director of a New York City TV station. She’d dispatch a camera crew to the scene, break into the programming with a bulletin saying “Aliens have landed!” – and then hope like hell she got good video of them to put on the air.

SR:  What conspiracy theory is your protagonist most likely to believe in? Roswell? JFK? Princess Diana? What about you? Any conspiracy theories that you think might have some truth to them?

RGB: Has to be JFK. Well, I don’t know how she feels about it, but that’s my favorite conspiracy theory. I mean I don’t believe for a second the Warren Commission or that Lee Harvey Oswald acted alone in the JFK assassination or any of the rest of the official story. I explored these themes already in a previous book THE KENNEDY CONNECTION with another protagonist, newspaper reporter Gil Malloy who goes looking for the real answers out of Dallas. I’d like to think that my current protagonist,, TV journalist Clare Carlson, agrees with Gil and me that we’ve never gotten the true story.

RGB: The integrity of being a journalist. My journalist character Clare Carlson cares about that a lot in the book, and so do I. There’s a lot of things changing in journalism today with print newspapers disappearing, the huge presence of social media and all the rest. But integrity remains the one constant. Without that, a journalist is lost. That’s a big message in my book.

RGB: The Big Sleep by Raymond Chandler. I’m not sure if I’d ever really read an actual mystery before, certainly not one like that. I was totally blown away by the book and by Chandler’s incredible writing. That’s when I first decided I’d try to write a mystery like that too. It’s not easy trying to emulate Chandler (and no one ever really has) but that was the start for me on the road to becoming a mystery author.

RGB: Being able to make stuff up. I spent my career as a journalist worrying about accuracy and checking facts and making sure everything we printed was true. When I write mystery novels, I can let my imagination take over and say anything I want. That’s a lot more fun!

RGB: Proofreading your manuscript for like the 100th time – and still finding tiny errors!

SR: What detail in your writing do you obsess over the most? Character names? Locations? Description? Dialogue? Research?

RGB: For me, it’s the character names. It’s tough coming up with names that are different sounding than the usual common ones – and yet appropriate or interesting for the character. On locations, I usually use places where I have been or visited recently so that’s not too hard. I tend to use less description of scenes and characters than a lot of authors, preferring to let the reader imagine what they look like in his or her mind. Dialogue is easy for me – I love to write dialogue. And I really don’t do a lot of research, instead writing about things like newsrooms or New York City or other things that I’m already familiar with. Yep, it’s the damn character names I definitely obsess about the most.

RGB: I don’t really think about that too much. The problem with writing about anything that’s really popular is it probably will be outdated by the time the book comes out. And, if someone picks up the book in paperback or whatever a year or two later, the dated quality of it will be even worse. So I stay away from fads and trends and pop culture references as much as I can.

SR: Do you relate more to Sherlock Holmes or Professor Moriarty? Why?

RGB: Sherlock Holmes. I root for the good guys.

SR:  If you have to live in a potential natural disaster zone, would you pick blizzards, hurricanes, tornadoes, earthquakes or volcanic eruptions? Why? If you had to describe your protagonist as a weather system, what would they be?]

RGB: Hurricanes. I’ve lived through a hurricane (more than one actually). I figure I have a pretty good chance of surviving that again, if need be. Never been in an earthquake – but that one really terrifies me from everything I’ve ever read and herd. Hopefully, I never have a first-hand experience.

SR: What movie or TV world do you wish you could live in? Why?

RGB: Seinfeld’s apartment building. Then I could go to the coffee shop with Jerry, Elaine, George and Kramer – plus hang out with Newman too.

SR: You strike it rich. What charity are you going to create or support?

SR: What factors influence you when you’re choosing a book to read?

RGB: Mostly the first page. I can tell pretty much right then if I’m interested in a book or not. After that, it becomes the character and the character’s voice. If I like that, I’m hooked – no matter how good or not so good the story is. On the other hand, a book with a great story and a not so great character will not hold my interest. I tend to have a handful of authors whose work I like that I read constantly – rather than trying a lot of new ones that I’m not familiar with.

SR: Do you have any special events coming up? Where can people catch up with you in person or on a podcast?

RGB: I will be doing a series of events – appearances, interviews, podcasts, blog posts – for my new novel YESTERDAY’S NEWS, including a book launch party at Mysterious Bookshop in NYC on May 8. You can check out my website at www.rgbelsky.com for all my event schedule details. 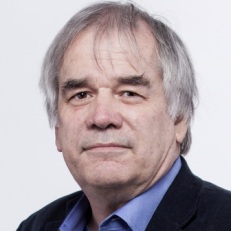 R.G. Belsky is an author of crime fiction and a journalist in New York City. His newest mystery, YESTERDAY’S NEWS, was published in May 2018 by Oceanview.  It is the first in a series featuring Clare Carlson, the news director for a New York City TV station. He previously wrote the Gil Malloy series for Atria about a tabloid newspaper reporter. Belsky himself has been a top editor at the New York Post (where he helped create the famous “Headless Body in Topless Bar” headline), the New York Daily News, Star magazine and NBC News. Two earlier Belsky thrillers that came out in the ‘90s – LOVERBOY and PLAYING DEAD – were re-released by Harper Collins recently in ebook form for the first time. www.rgbelsky.com