On warm summer nights, my mother would spread a blanket on the lawn, gather the neighborhood kids, and tell us ghost stories. We’d shriek in glee at the punch line of “The Pickled Hand,” in which doctors play a prank on a nurse using a hand preserved in formaldehyde. Overcome by shock, the nurse is discovered eating the hand.

I inherited my mother’s knack for story-telling, and as a teenager entertained my nephews with ghost stories. Once, I made up a story that a body was buried behind a wall of their home. As if interpreting a Rorschach blot, I said you could see the body’s face projecting through one of my father’s abstract paintings hanging on the wall. Then I left a tape recorder running in the corner that night, which emitted moans and strange sounds. Pranking them, just like in “The Pickled Hand.”

So horror, mystery, and story-telling became entwined for me from an early age. I devoured The Hardy Boys mysteries. But my favorite childhood book was “The Man Who Was Magic,” by Paul Gallico. It’s a beautiful story about someone who is misunderstood, who possesses real magic in a city where magicians use fakery, and how he opens the eyes of a young girl to the world around her. I still re-read it periodically, laughing and crying in equal measure. That book inspired me to want to recreate experiences like that for others.

I actually started out in college intending to major in creative writing. At the end of my difficult sophomore year, however, I decided to focus instead on my other passion, music. Composing and performing dominated my adult life for a long time. Artists as diverse as Joni Mitchell and Laurie Anderson, masters at telling memorable stories through music, inspired me along the way.

There are so many ways to bring music and writing together. Many are familiar (lyrics, musicals, spoken word), but I’m also interested in meta-combinations, where music lives both apart and as part of a story. One such surprise hides in my latest novel, “The Shatter Point.” So far, no one has uncovered the mystery. I suppose at heart I’m still that teenager with the tape recorder, pranking others.

Don’t Miss: What’s on Jon O’Bergh’s To Be Read Pile

Also: We talk with Jon about his latest novel, The Shatter Point 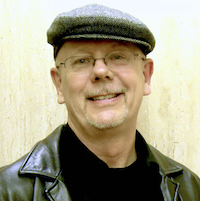 Jon O’Bergh is an author and musician who loves a good scare. He grew up in Southern California, where he received a Bachelor of Arts in Music from the University of California at Irvine. A fan of ghost stories and horror movies, Jon came up with the idea for “The Shatter Point” after watching a documentary about extreme haunts. He has released over a dozen albums in a variety of styles, including the atmospheric album “Ghost Story.” After many years living in San Francisco and Washington, D.C., he now spends most of his time with his husband in Toronto.