What is Furry Noir? You know you have to click now to find out.

Bill Kieffer talks about Mount TBR, what you’ll find there and bookcrossing.

Is My Colorblind Rainbow one of the best book titles ever? Chanel Hardy talks about her inspirational YA story.

Which protagonist is cranking up Ruth Etting, Billie Holiday and Louis Armstrong? Find out here.

What do Lisbeth Salandar and Arya Stark have to do with Secrets? Find out here.

Casting Call: Find out which SVU actor Barbara Winkes would pick for one of the lead roles in Secrets.

Don’t forget! Enter now to win a signed copy of Here and Gone.

Did you miss it? I’ve been trying to get Brian to blog more about music for a long time. He has his own system for finding obscure genius and up-and-comers before they make it big. His first music post installment is available here.

On Monday I blogged about using thematic writing to help enrich your books and to help you promote them more effectively. The timing was perfect. The Historical Novel Society just ran a feature on the latest books from Susan Meissner and Mindy Tarquini, who talk about using historical settings in their works. Both Meissner and Tarquini, who had short stories published by Spinetingler Magazine, placed their works during the influenza pandemic in 1918 and 1919.

Now that it’s public I can congratulate my sister on her new position as the cataloguer and collection development for a public library in Alberta. Yes, she’ll be working closely with other staff to decide which books to stock. No, I can’t give you here phone number. She makes this move after years of working as a media specialist in the public school system.

A Question For The Masses 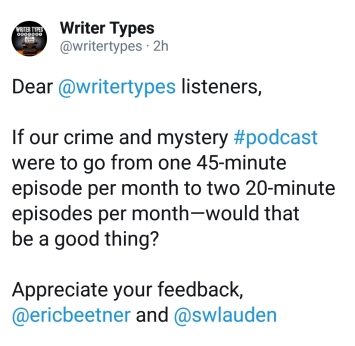 Head over to Twitter to share your opinion. I have to admit it would probably appeal to me. I aim for short breaks and I have the attention span of a gnat when I’m strictly listening to audio. This doesn’t apply to music but years of tuning out teachers because I was 10 steps ahead in class and could follow instructions from a book conditioned me to zone out.

I’ve found myself watching more comedies over the past two years. I credit the political climate for this trend.

Loving Patton Oswalt as we do, we decided to check out A.P. Bio. We hoped it could help fill the gap between seasons of The Good Place. It was a rough start but it has gotten better. The writers and directors need to understand something, though. The whole revenge storyline? Weakest part of the show. Beyond done with it.

Opinion: No, We Haven’t Reached All Readers 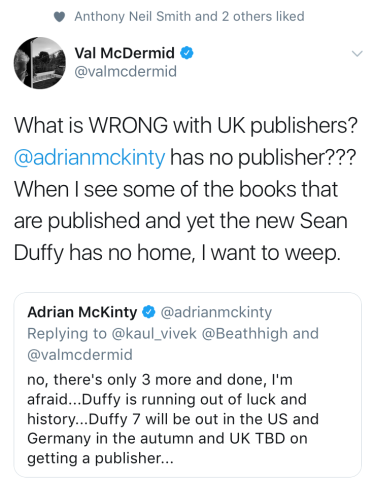 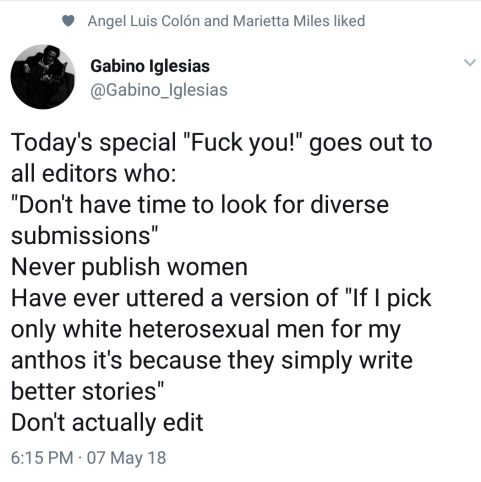 There isn’t much you can say when the likes of Adrian McKinty don’t have a publisher in the U.K. except what the fuck? And there are a lot of reasons Gabino Iglesias is cussing at editors that he names. While my objective here isn’t to simply point to things I’ve said, this does bring to mind a recent discussion on Twitter about failings of the publishing industry and how far behind it is when it comes to understanding segments of our population.

The discussion centered on the response of the publishing industry to the popularity of Roseanne and the reasons behind the success of the show’s comeback. All of a sudden publishers realized there was a whole world outside of New York City where people thought differently and had other interests.

This is why I’m going to maintain that no, we have not reached all potential readers. There are people out there who would buy books or borrow books from libraries (and drive up demand because of volume of requests) if they found books that spoke to them. The publishing industry has had its head up its ass on some things and it needs to get its head out of its ass to survive. There should be books out there for everyone. People are more likely to buy and treasure and recommend books that speak to them. And if you’re only speaking to the population of NYC that’s very nice for them, but what about the rest of the country? Or even North America? Or Europe and the other continents on this planet? It seems to me that publishers would be far more effective with selling books and reaching new readers to increase profits if they hired some sociologists to break down the cultural groups within the country and the priorities of those cultural groups, as well as their typical beliefs and customs. Not all Americans think the same way. And, shock of horrors people, individuals who are part of a group that’s experienced racial or gender prejudice or discrimination due to their sexual orientation have specific interests. Male authors have been called out for how they describe women in literature. We need to start thinking about the way that we’re presenting pertinent social issues in our fiction if we don’t want to alienate readers. That doesn’t mean pretending that sexism and racism don’t exist but it does mean we need to make sure we aren’t glamorizing it. I’ll make a face about a lot of stupid jokes about Canadians but every now and again something just crosses a line for me. It’s a statement that’s so stupid it isn’t even funny; it’s just pathetic, particularly since something more accurate would have been more effective in its place. We all have lines and when publishers fail to realize this and exclude whole segments of the population they are reducing their potential book sales.

In the same way that little Susie and May want dolls that share their hair and skin color, readers want characters they can identify with. And if the entire world you write about involves white protagonists, black criminals and Chinese Americans who own Chinese restaurants then you aren’t presenting the world I live in. Or the world I want to live in.

P.S. Television has been on to this for a long time. And its enjoying another golden age. Publishing needs to get with the program.

Today is the final day to get your entry in for the International Book Awards. Don’t miss out. Visit their website to find out about eligibility and how to enter.

Staying With That Wednesday Theme…

I can’t imagine how it’s going to end well on The Americans. Stan will be under the gun when it’s revealed he’s been chumming around with Russians for years, assuming he lives to face that discovery. And the stench of death lingers over Elizabeth, and not just because of all the people she’s killed. She’s expected to take her own life rather than be captured and that could be on the horizon for her.

And Paige… She’s going to screw up so badly she could be responsible for getting herself killed. Or her mother. With only a handful of episodes left we’re on the edge of our seats waiting to see how its all going to pan out. One thing is for sure – I’m really going to miss The Americans. And kudos to the crew because, while I’ll miss the show, that’s because they knew to end on a high note and not drag the show out just for the money, ala Walking Dead last season.

Thoughts On A Celebrity I Do Not Care About

While I hate to come across as though I’m setting up rules about what people are allowed to talk about, I am beyond sick to freaking death of hearing about Kanye Fucking West. Let’s not validate this whiny beeyatch by talking about him. Who the hell is he anyway? The guy who robbed Taylor Swift of her moments when she won some awards? The guy who’s always criticizing Swift? Does he make music himself or just bitch about everyone else in the world? Scratch that – I so do not give a shit so don’t answer.

But if anyone – anyone -is going to talk about Kanye and all his fucked-up-ness, then let it be Ta-Nehisi Coates.