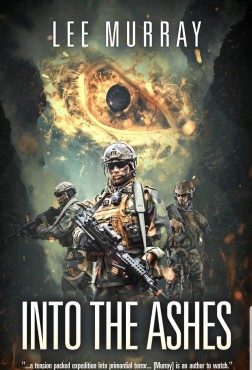 All hell is breaking loose in Lee Murray’s INTO THE ASHES right from the start. A constant series of eruptions coupled with activity from the volcano have prompted an extensive evacuation of parts of New Zealand’s North Island. NZDF Sergeant Taine McKenna* is ordered to evacuate people from the area and has no idea how just how complicated that’s going to be.

First, the ground is splitting apart. Second, there are fire demons that may or may not be wreaking havoc and claiming lives. Third, there are rivers of rubble blocking roads and sweeping people and vehicles away.

Oh, and there just happen to be a group of armed convicts from the prison who are on the loose with a dangerous leader who is determined not to be charged for the murder of a guard that he commits in order to gain his freedom.

Add in that Taine’s ex-girlfriend, Jules, is on the mountain and is taken hostage by the convicts and you have a cat-and-mouse game with Taine determined to rescue Jules, but forced to overcome obstacles every step of the way.

This is an edge-of-your-seat white-knuckle ride that is action packed and intense. You never know what will happen on the next page. Murray is an expert at weaving multiple plot lines and perspectives together and always keeps the reader straight so they know whose eyes they’re seeing the world through and where they are. As the characters intersect the obstacles increase and the body count rises. Both Taine and Jules are coming to terms with the fact that they still love each other, but equally aware of the likelihood that they’ll never get a chance to put things right.

Lee Murray has been a guest at Toe Six. Check out her actor picks to play Taine and Jules here. Learn about her writing assistant, Bella, here. Read an interview about Into the Sounds here. And then Lee was back with Dan Rabarts to talk about their collaboration here.

* Completely personal note. In three of my novels set in Canada I have a protagonist named Tain, who is Native. And in my novel Harvest of Ruins my protag’s surname is McKenna. How can I not love a character who combines two of my favorite names to make one supercharacter (who thinks he’s a superhero)? And he has some Indigenous blood from one of New Zealand’s tribes as well, so he’s in tune with the spiritual aspects of the story.