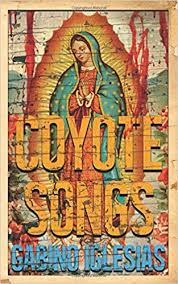 On a map it’s easy to look at a line and call it a border. Down on the ground though, borders are amorphous spaces where people and things blend and mingle and aren’t always so clear cut. Within that blending, magic happens. That’s one reason why walls suck. Coyote Songs takes a mosaic approach to showing us some of the stories on the border. Stories with heart that have some genuinely awesome moments and some genuinely moving moments.

Coyote Songs at times occupies some of the same limnal space as “The Cowboy Bible” by Carlos Velázquez and “The Kidnapped Space” by B Traven. Which, to be clear, isn’t to suggest that Coyote Songs is derivative in any way, but only that this mosaic novel is itself, one tile of a larger mosaic of Border fiction. 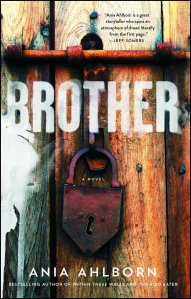 The great writer Derek Raymond, influenced by classic 20th Century American hardboiled crime fiction wrote of the black novel. He said, in part, that, “The black novel…describes men and women whom circumstances have pushed too far, people whom existence has bent and deformed. It deals with the question of turning a small frightened battle with oneself into a much greater struggle — the universal human struggle against the general contract, whose terms are unfulfillable, and where defeat is certain.” The black novel is similar to noir.

Sometimes the best noirs are what I call accidental noirs. Meaning, the author didn’t necessarily set out to write a noir story, but one emerged out of the darkness. I’m often wary of noir used as a descriptor or marketing term. If an author or the marketing surrounding a story categorize it as noir, I’m skeptical. But those accidental noirs, the venture out into the darkness? Those are special. Brother isn’t, strictly speaking, a noir. But it is a black novel and any basement noir crazies out there should check it out.

Brother is sharply told, has characters that will evoke strong feelings, some you will support, some you will loathe. By the time you suspect where the story is heading it is too late, you are strapped in for the ride. And as bad as you think it will get, it winds up being worse. 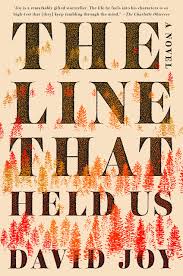 The Line That Held Us by David Joy

The Line That Held Us got me thinking about the Lindenmuth men in my own family. My great-grandfather, Old Heck, was a trapper in the mountains of Pennsylvania. He would spend months at a time out trapping, come back to town to sell his pelts, drop off some money to my great-grandmother (presumably), and head back out. My grandfather had a large nose, so people around town started calling him Old Hook. He was an avid and life long hunter. My grandfather took my Dad hunting when he was a boy. He sighted a deer and, in that moment, realized he didn’t want to shoot it. He also realized that he couldn’t tell grandfather this so, in an elegant solution, shot the ground off to the side of the deer, scaring it. You see, he realized that the most important thing for him to do, in the moment, was to pull the trigger. It was better to pull the trigger and miss then to not pull the trigger at all. And I have never been hunting (but I have no problem with it, to be clear).

Over the years this progression has been jokingly called both the evolution of man and the de-evolution of man. While it makes for a good punch line, it sacrifices accuracy. If one is feeling generous, they could place the Lindenmuth men along a kind of continuum that might represent the wild on one side and something like civilized on the other.

The three main male characters in The Line That Held Us fall at different places along a similar continuum. Dwayne is wild and not fit for town living. He follows more primal ways and cuts right through the often unspoken norms that bind a society. Calvin is a guy who lives and works and succeeds fully within the bounds of society. He has a job, a woman that loves him, and goals and things he wants to accomplish. In a way that most of us understand, he has the most to lose. The man that connects them is Darl, who has a foot in each world. He wants to spend as much time as possible out in the woods, hunting. But he needs his connections to those in his small circle of family and friends. His presence in each world recharges his battery for his presence in the other.

The men on this continuum will clash and the outcomes won’t be neat. How they clash and the messiness that ensues is for the reader to find out. 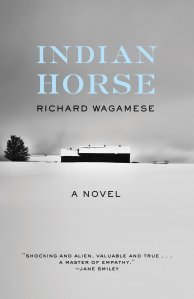 On the surface, Indian Horse is about hockey and the Indian Residential School system in Canada, but it encompasses so much more: trauma, loss of culture, loss of identity, growing, and the long hard path to righting your ship when so many forces were hell-bent on sinking it. It’s told in an intimate, confessional way that draws you into the narrative, deeply investing the reader into the story of Saul Indian Horse.

Richard Wagamese died in 2017 and I’m sorry it took this long to read him, I’m now a fan and can’t wait to read his other books. He has said on numerous occasions that Indian Horse, originally, was intended to be a “Shoeless Joe does hockey” novel. I have no doubt that Kinsella’s novel was the starting point and structure and inspiration for Indian Horse but it is more akin to Norman Maclean’s A River Runs Through It, especially in the sections of the book that describe hockey and everything that it means and is capable of. But also in the way the it deals with the helplessness of wanting to help someone but not being able to or knowing how.

Upon finishing Indian Horse I had the rare feeling of wanting to immediately read it again. And I’m sure I will again, soon.

Side note: The hilarious and profane Canadian TV show Letterkenny has a running joke about the Native hockey teams. In the world of the show, the Native teams are so tough and so feared that when teams have to play them, some players are inevitably sick and can’t play those games. Those players that call out are said to have “the native flu”. After reading Indian Horse, and its representation of how the Native players learn the game, and the conditions they play under, especially when compared to their white counterparts, it’s easy to see how that reputation can develop.

Indian Horse was made into a movie and released earlier in 2018. I look forward to checking it out when it becomes available.