“I can sing the hell out of  ‘A Horse with No Name’ at karaoke.” – Rusty Barnes 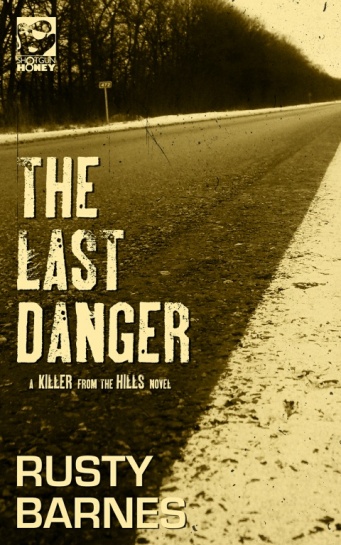 SR: Practice pitching: tell us what your new book is about in 50 words or less.

RB: The Last Danger continues the exploits of Matt Rider, protagonist of Ridgerunner, in his continuing battle against the renegade Pittman family, which leads to him running drugs and money back and forth across the Canadian border. It doesn’t go well.

SR: Where did your idea for this book come from?

RB: I wrote the three novels that became the Killer from the Hills series in quick succession in 2014-15, with the intent of doing a series chronicling the journey of a law-abiding man who quickly becomes broken and lawless: an antihero. I’d just recently joined a couple groups celebrating the books of my youth: men’s paperbacks of the 70s and 80s, in particular mob-related fiction, crime fiction, and westerns, and I wanted to write an homage to those books I loved so much growing up and which largely formed the pleasure reading of my adulthood. I went from reading pulp in my teens to reading mostly literary fiction then back to pulp again in my mid-late 40s, and my writing habits followed suit, and thus Matt Rider was born.

SR: What’s one thing that you and your protagonist have in common?

RB: We both grew up in rural northcentral Pennsylvania, the foothills of Appalachia, which formed the basis of commonality in our personalities: a natural distrust, maybe even resentment, of authority and a strong connection to family. There the resemblance pretty much ends.

SR:  Cage match between you and your protagonist. It’s a fight to the death. Which one of you will be left standing, and why?

RB: It depends. I’m a pretty big boy, so if I can get him down on the ground I’ll have a fighting chance.Otherwise, Matt kicks my ass six ways from Sunday, as he’s in shape and packing and I’m neither.

RB: Beginning in the mid-to-late 70s, my family was involved in competition muzzleloader shooting and period reenactment, so I read a great deal, fiction and non-fiction, about the American frontier and the popularized version of the ‘winning’ of the west, with a special interest in events happening pre-1840. The first book of those I remember reading was Sackett’s Land by Louis L’Amour, part of a long-running series which featured, chronologically, the first Sackett to come to America, Barnabas. This roughly paralleled the Barnes family coming to America from England, and in my mind’s eye, the Sacketts became Barneses and suddenly I had a deep and abiding love of genealogy, history and living history, putting my family members–we were large and contained multitudes–in place of the Sackett heroes, and starring in adventures I played out with action figures and with my cousins and friends. I wrote, mostly Poe-influenced poems and little stories, then, but I decided to become a writer, whatever that meant, in 1989, and I’ve done little else since but pursue that goal.

SR: What was your journey to publication like? What kind of obstacles did you have to overcome?

RB: It took me a year to find a publisher, and 280 Steps accepted all three Killer from the Hills novels, then went kaput after publishing only the first, Ridgerunner. I was floundering, looking for something to do with the books. In the meantime, I wrote and sent another novel out, Knuckledragger, which Ron Earl Phillips at Shotgun Honey agreed to publish, and when 280 Steps went under suddenly, Ron offered to take the Killer series on and republished Ridgerunner, which I’m forever grateful for. The third book in the series will come out eventually, I hope, but in radically different form than I originally wrote it, as is necessary given the way this one turned out after revisions. The book took a darker turn, let’s say.

SR: Tell us something about you that isn’t common knowledge.

RB: I am the size of an NFL lineman without the musculature.

SR: Everyone needs an outlet to help them recharge. What hobbies do you have outside of writing?

RB: Outside of writing, I fuel myself by editing other people at my journal Tough, writing poems in between fiction projects, and playing popular songs on the ukulele, as well as spending time with my amazing wife and family.

RB: Read everything in sight. There will come a time when you won’t read as much, and you’ll regret every second you didn’t spend seeing what else was out there to emulate, learn from and aspire to.

Rusty Barnes is a 2018 Derringer Award finalist and author of the story collections Breaking it Down and Mostly Redneck, as well as four novels, Reckoning, Ridgerunner, Knuckledragger, and The Last Danger, His fiction, poetry and non-fiction have appeared or are forthcoming in many journals and anthologies. He founded and edits the crime journal Tough.