Fun Fact: Lucy says, “People often assume that because I’m a woman author I write romances, but the only romance story I’ve written so far was for a level of an online game called Fish Wrangler.”

My husband Gary and I have four cats — all of whom try to “assist” my writing at some point during the day — but my main assistant is Monte. We’ve had him since 2002 when we still lived in an apartment. He showed up on our back patio on the first bitterly cold night of the year right around Thanksgiving. Monte was a little kitten, just a few months old, and he was completely feral and afraid of people. He was so small that we were worried he’d freeze out there. He ran from us whenever we went out there, but he kept coming back to the glass patio door because he was curious about my roommate’s cat Simon. 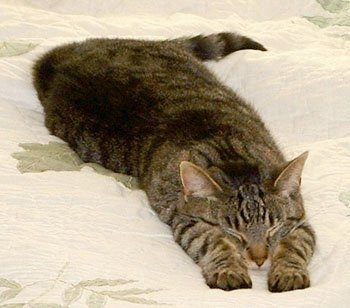 So, we sort of hid around the corner, opened the patio door a few inches, and used Simon to lure the kitten into the apartment. He came in, and we shut the door … and then spent the next half-hour trying to chase the little guy down so we could get him into a cat carrier. We expected him to fight us furiously, but when we got our hands on him he just went limp, purring. 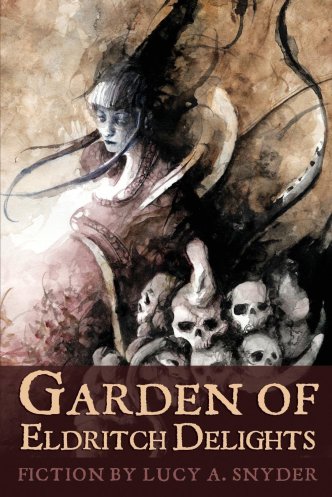 He’s a pretty old boy at this point and suffers from hyperthyroidism. This means that when his “stomach alarm” goes off, it goes off loudly. It also means that he needs to take a pill twice a day, which we hide in a bit of food that he loves. So he’s become very demanding of his meal/treat times. I’ll be at my desk working, and suddenly he’ll be up on my lap, yelling in my face. If he had a cane, I’m pretty sure he’d bang it on the floor.

But he’s a good boy, and a real sweetheart. He’s a beside-the-lap cat. When we’re watching movies on the couch, he likes to squeeze down between us and lie there purring loudly.

But most of the time, he’s just hanging out in my office, keeping me company while I write.

Check out our interview with Lucy A. Snyder here. 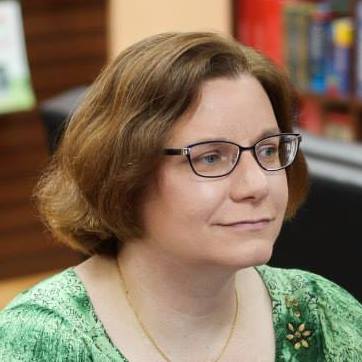 Lucy A. Snyder is the five-time Bram Stoker Award-winning author of over 100 published short stories. Her most recent books are the collection Garden of Eldritch Delights and the forthcoming novel The Girl With the Star-Stained Soul. She also wrote the novels Spellbent, Shotgun Sorceress, and Switchblade Goddess, and the collections While the Black Stars Burn, Soft Apocalypses, Chimeric Machines, and Installing Linux on a Dead Badger. Her writing has appeared in publications such as Asimov’s Science Fiction, Apex Magazine, Nightmare Magazine, Pseudopod, Strange Horizons, and Best Horror of the Year. She’s faculty in Seton Hill University’s Writing Popular Fiction MFA program. You can learn more about her at www.lucysnyder.com.