“The title story in TOWNIES takes place in a honkytonk just outside of an unnamed East Texas town. When a series of accidents cause the bar staff to systematically die off, one-by-one, it’s up to Darcy, the new manager, to determine the cause.”

“I have been kicked out of a bar, a school, a church, and a country.”

SR: You’ve released a short story collection. Tell give us a teaser for the oldest story in your collection. 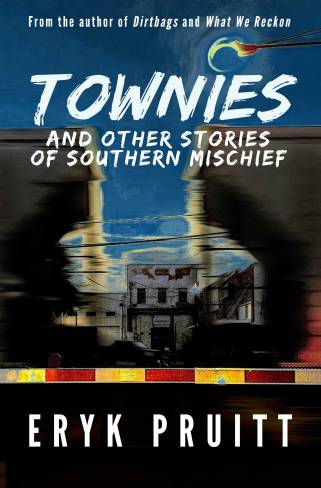 EP: The oldest story is probably “An Afternoon with the Parkinson’s,” which was published in the literary journal where I went to college. I fixed it up and had it republished by The Avalon Literary Journal in 2012.

SR: Where did the title come from?

EP: I once worked a summer with a man who had late-stage Parkinson’s disease. This was my attempt to get inside his head.

SR: Tell us about one of your favorite stories that’s included in your collection.

EP: Out of the Gutter’s Flash Fiction Offensive published my short story “Knockout” in 2015. It was a revenge tale about a victim of The Knockout Game, a fad where kids posted videos to YouTube of knocking out strangers with one punch. When I traveled to Detroit that summer, I was terrified of getting hit by some kid, so it manifested into a story. I was super stoked later that year when it was named a finalist for the Derringer Award.

SR: What is it about writing short stories that appeals to you?

EP: It lets me suss out a plot or character without having to commit to a full novel. Every short story I’ve written was a novel I didn’t have time to write. So that’s forty-plus novels I can come back to when the well runs dry!

SR: How do you think short story writing has strengthened you as a writer overall?

EP: It’s helped me make things lean and mean. The first time I wrote a 5000 word story and had to edit it for a 3000 word market was brutal. So brutal. But every one of those cuts made the story stronger, and I learned from it. Even now, I trim my chapters in a novel to 3000 words before I send it to the betas.

SR: Do you have any recurring characters you feature in more than one short story? If so, what is it about the short story format that suits those characters?

EP: I have a character named Deacon Easter who pops in and out of stories. He’s a fuck-up who ends up in bad situations. I actually snipped a couple of the Deacon Easter stories out of TOWNIES, so only two survived the cut. But the most recurring character isn’t a person, but a locale. The setting of my novels—Lake Castor, the fictional Virginia mill town—makes several appearances throughout the book. There’s even a glimpse of Lake Castor in the 80s with the story “It’s Morning Again in Lake Castor.”

SR: Which story in the collection is the most personal story for you? Why?

EP: I wrote a story titled “The Only Hell My Momma Ever Raised” for inclusion to an outlaw country anthology published by Down & Out Books. It tells the story of the black sheep of a family who comes home to see his mother before she dies from disease. Between the second and third drafts, my mother was diagnosed with cancer. The fourth draft took on a new trajectory.

EP: I want folks to have a good time, have some laughs, and hopefully get a little weirded out. As for philosophy: I hope they see dark fiction from the South in a slightly different light. But most of all, I hope they want to see some of these stories on the big screen and help us get them made.

SR: When you looked at your stories as a collection did you notice anything about your writing or themes that hadn’t really stood out to you before?

EP: Said once or twice while choosing these stories: “Dang, I used to be a lot angrier than I am now.”

SR: What was the first short story that you had published? Tell us a little about it and how it got published. How did that experience impact you as a writer?

EP: Outside of the lit journals in college, my first published short story was “Coda,” published by MAD SCIENTIST JOURNAL. It was (and still is) a paying online market that requires you to fashion your story after a journal entry written by a “mad scientist.” At the time, I had a story about two mismatched lovers with a penchant for violence, but I couldn’t think of an interesting enough way to frame it. When I saw the MSJ challenge, a light clicked on in my head, and I jumped at the chance. They accepted it and suddenly I had something to put in my bio. I really think that helped, having publications listed in a bio, because it convinced other markets that I was worth taking  a chance on. At any rate, I revisited that couple several other times in fiction, ultimately later including the two starcrossed lovers—”Sweet” Melinda Kendall and Sam Tuley—in the final third of my second novel HASHTAG. So often, people want to know what happened next for Sweet Melinda after the final pages of HASHTAG…I’d recommend they hunt up “Coda.”

EP: AGATITE, by Clay Reynolds. I had taken a bunch of lit classes and reading started to get on my nerves. Mr Reynolds made reading fun all over again, and set the book in rural Texas, which was an area I knew all to well.

SR: What do you think the hardest emotion to elicit from a reader is? Why?

EP: Humor. Laughter. It’s hard to suss out a laugh because my sensibilities are so dark, it’s not always going to strike a chord. What one person might find funny, another will find offensive. So it’s a fine line and a huge challenge, but that doesn’t keep me from trying. The biggest compliment I’m ever given is when somebody tells me they laughed throughout my books. There will always be a warm place in my heart for the dearly departed reviewer William E Wallace for calling DIRTBAGS “the funniest serial killer novel ever written.” Thanks, Bill.

EP: Exorcising demons. It gives me the opportunity to zig when I could have zagged, or to take the road less traveled.

SR: What detail in your writing do you obsess over the most? Character names? Locations? Description? Dialogue? Research?

EP: Tone. I waste a lot of drafts trying to get the tone I want.

SR: What was your journey to publication like? What kind of obstacles did you have to overcome?

EP: I queried agents and editors every day when I was shopping DIRTBAGS. If there wasn’t a rejection letter in my Inbox when I woke up each day, that meant I wasn’t trying hard enough. Six months of that and when I finally got the acceptance, I stared at it for an hour.

EP: I rarely stand things that are popular. Every once in a while, I get surprised. For example, I expected to hate Gillian Flynn, but man was I wrong. If I see everybody going one way, my natural inclination is to try something from a different way or POV or genre. It’s not me trying to be contrary, but I find little reason in chasing something.

SR: Do you relate more to Sherlock Holmes or Professor Moriarty? Why?

EP: I like to cook for myself so Italian

EP: I’ve been waiting my whole life for the zombie apocalypse. When I die, the credits roll. I make it to the end.

SR: What movie world do you wish you could live in? Why?

EP: More of a TV show. I’m a WALKING DEAD guy. I’m tired of the way things are. I’d like to hit the reset button and have a chance to shape how things will be from now on. A good old fashioned zombie apocalypse might be what we need to get that started.

SR: Everyone needs an outlet to help them recharge. What hobbies do you have outside of writing?

EP: I have a vegetable garden and I’m pretty obsessive about it. I also live near a river and a state park, so I’m a hiker.

SR: You strike it rich. What charity are you going to create or support?

EP: You learn more from reading bad books and watching bad movies than you do from good ones.

Eryk Pruitt is a screenwriter, author and filmmaker living in Durham, NC with his wife Lana and cat Busey.  His short films FOODIE and LIYANA, ON COMMAND have won several awards at film festivals across the US. His third novel What We Reckon can be found on bookshelves across the country. Be on the lookout for his first short story collection Townies and Other Stories of Southern Mischief, due from Polis Books this October. He is the host of the Noir at the Bar series in Durham. A full list of credits can be found at erykpruitt.com.