Fun Fact:  Some authors write in a coffee shop, others to classical music, country or rock. Judy writes to talk radio, even listening to weekend paid programming. She can tell you what to do or not do if you want to buy a car, how to hire an employment or injury lawyer, or invest in fancy colored diamonds. 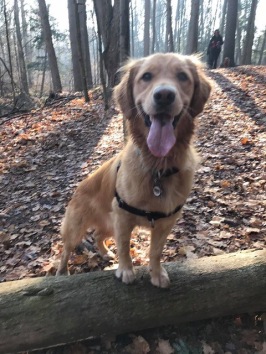 Gibbs is a three-year-old Golden Retriever, named after Leroy Jethro Gibbs on the TV show, NCIS. For those unfamiliar with the show, Gibbs is a former Marine turned special agent who commands a team with the Naval Criminal Investigative Service.

My Gibbs spends most of his days lying under my desk as I write. He’s even been known to listen to me practice an author reading, though I’ll admit his feedback is minimal. But perhaps his greatest role is that he gets me out walking, and it’s on those long walks that I often come up with my best ideas.

Finally, I love that the U.S. Marine Corp’s motto is Semper Fi, which means “always faithful” in Latin. Perfect, right? 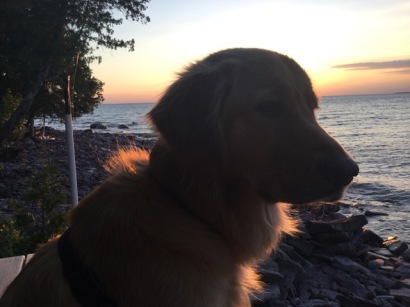 Judy Penz Sheluk is the Amazon international bestselling author of the Glass Dolphin Mysteries (The Hanged Man’s Noose; A Hole in One) and the Marketville Mysteries (Skeletons in the Attic; Past & Present). Her short stories appear in several collections.

Judy is also a member of Sisters in Crime, International Thriller Writers, Inc., the Short Mystery Fiction Society, and Crime Writers of Canada, where she serves on the Board of Directors, representing Toronto/Southwestern Ontario. Find her at http://www.judypenzsheluk.com.